skip to main | skip to sidebar

Yeah! We did it! We finally did our first show as Nate & Nathan. We're calling it a Beta show, which is an appropriate name for it. Why? Well, because it was a much anticipated release, but like a lot of products that are highly anticipated, there were a few bugs in the system. We'll definitely be working those out before our next big show. But the show was definitely a huge success. We had a fun and "quaint" crowd and they were ready to laugh. We apologize to the father and his three sons who were not aware that our show is not a family oriented show. They walked out in the middle of Nathan's story about the first time he had sex. It's too bad, because it was a pretty funny story. But anyway, keep your sights on our sites to find out when our big full release will be. It should be sometime in the next month or so. We're really excited about it. We hope to see you there!
Nate, of Nate & Nathan
Posted by Unknown at 4:20 PM No comments:

Hey friends and family of PartyTron. After much waiting and worrying, the folks over at PartTron were finally able to get those photo booth pics up for your enjoyment. Nate and I hope you enjoy them!

To view 'em just click here, or on the link under the "More Nate and Nathan" menu entitled "PartyTron '07, Vol. 1 Pics", and if you like them keep friends coming back for more. Just send them to NateandNathan.com.

This is where we will post our latest posters created for us by the mad geniuses at west. Feel free to copy them to your computer, print them out, put them all over town, or rub them on your naughty bits. If you'd like to buy a full quality print of one of them, send us a line at nate@nateandnathan.com and we'll hook you up.

Here is the first poster

Posted by Unknown at 7:51 PM No comments:

Thanks to everyone who came to celebrate Adam's birthday and throw it down at PartyTron 07, vol. 1.

If you are here you are probably looking for the PartyTron Photo Booth pics... well, they are on their way. The organizers are currently, as we speak, working on getting those fantastic pics of fun and revelry up for your viewing pleasure.

The organizers are pretty sure it shouldn't take that long... but sometimes technology scares us.

Hope you rocked like you have never rocked before, and check back... um... we'll say later this week for an update.

Does anyone else think that the only reason Sanjaya is still on American Idol is because all of his fans are the people handling the phones for the voting process?
Posted by Unknown at 8:39 AM 1 comment:

It’s one thing to make your dogs play dead, but making your kids play retarded, now that’s just wrong! Or is it? Oregon resident, Rosie Costello, was convicted Tuesday on charges of conspiracy to defraud the government and Social Security fraud. Costello admitted that since the mid 1980’s she collected more than $280,000 in benefits. She did so by making her two children pretend they were mentally challenged when meeting with Social Security officials. BRILLIANT! I mean…HORRIBLE! What kind of mother would do this? Maybe the mother of say…Leonardo DiCaprio! Remember a little movie called What’s Eating Gilbert Grape? Before he decided to star exclusively in Martin Scorsese films (a shrewd career move) lil’ Leo got his start by fooling the world and making us think he lacked proper adaptive social behavior. He got paid well for his performance and received critical acclaim. Pete Costello, one of the two children who participated in Rosie Costello’s scam, was merely following in the footsteps of DiCaprio. Like Leo, Pete would sit with a slouch, pick at his face, and exert poor communication skills. But instead of receiving critical acclaim, he received a claim by critics. The claim? That he was breaking the law!

Pete Costello, 26, was caught when a video of him appearing in court to contest a traffic ticket was uncovered by Social Security officers. But was Pete really committing a crime? Or was he was mimicking Leo’s career path by taking on another role? After DiCaprio played Arnie Grape, he appeared in the film The Foot Shooting Party. Likewise, after spending years acting like he was mentally handicapped, Pete Costello shot himself in the foot by appearing in court.

So who’s to blame? The scheming mother/casting agent? The dubious son/failed actor? Or the Oscar nominee/Globe warming Leonardo DiCaprio? If we can blame rap stars like Eminem for inspiring our children to behave in a more violent manner, can’t we blame actors like Leonardo DiCaprio for inspiring our children to behave in a more handicapped manner? Why are celebrities rewarded for faking retardation, while our children are persecuted? Sean Penn did it in I am Sam, Tom Hanks did it in Forrest Gump, and virtually the whole cast of The Ringer did it. Sean and Tom were awarded for their efforts, and the cast of The Ringer…well, they weren’t asked to leave the country. Awarding this kind of performance sends a message to our youth that it is okay to act mentally challenged. It is also says that we think perfectly capable actors can do a better job of playing these roles than actors who are actually handicapped. And if you think that’s true, try telling that to Corky!
Posted by Unknown at 5:13 PM No comments:

Luke, I Owned Your Father

Not since Luke Skywalker

found out that Darth Vader was his father has there ever been such an incredibly crazy revelation of family lineage as today. Al Sharpton, the black man who ran for President in 2004 calling for racial equality, might be related to Strom Thurmond, the now deceased crusty old white man who ran for President in 1948 as a segregationist. Holy crap! According to the people at Ancestry.com Sharpton's great-grandfather Coleman Sharpton was a slave owned by Julia Thurmond, whose grandfather was Strom Thurmond's great-great-grandfather.
Nothing has been determined yet, but if this turns out to be true, this will be proof that God does indeed have a sense of humor. The only downside to this story is that it wasn't discovered three years ago before Thurmond passed on so that finding this out could have been what killed him. I look forward to the Oliver Stone version of this movie where that is what happens. Al Sharpton will be played by Samuel L. Jackson, and Strom Thurmond will be played by Peter O'Toole. The final line will be Samuel L. yelling, "Fillibuster!? I'll Fillibusta' cap in yo' motherf***in' ass!"
Posted by Unknown at 4:52 PM No comments: 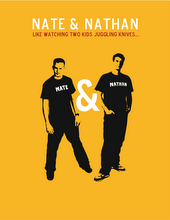 Get our blog in your e-mail!

More of Nate and Nathan

Least Favorite Places to be Punched